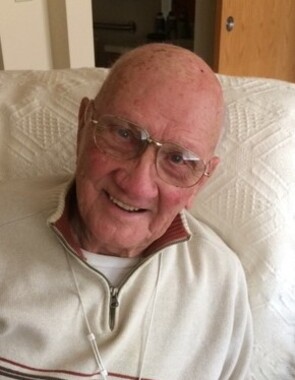 Back to Charles's story

Charles William Day, age 94 of Knoxville, Iowa, passed away Friday evening, December 27, 2019 at the Iowa Veterans Home in Marshalltown, Iowa, where Chuck had been residing.
Chuck's wishes were to be cremated and Chuck's family will be greeting friends from 9:00 am to 11:00 am at the First United Church in Knoxville, on Saturday, April 18, 2020. Following the visitation, a Celebration of Charles' life will be held. Burial with military honors will be held at Greenwood Cemetery following the service.
Charles was born on December 18, 1925, in Polk County, Iowa, the son of Charles W., Sr. and Marie (Butters) Day. Chuck was raised in the West Des Moines area and graduated from Valley Junction High School, Class of 1943. Soon after high school, Chuck and several high school friends enlisted into the United States Military. Chuck served his country in the Army Air Corp. He served January 26, 1944 to November 23, 1945 as a Tail Gunner and Armorer Gunner on a B24. He was stationed in Italy and flew 25 missions across Europe.
After returning from service, Chuck moved to Winterset, Iowa and joined his father in his Ice Company. While in Winterset, Chuck was introduced to Mary Belle Clague and on September 7, 1947, Charles and Mary Belle were united in marriage. They shared 68 years of marriage and were blessed with two children, Pamela and Bradley. Mary Belle died in November of 2015.
Chuck and his family moved several times while Chuck was working in the grocery business. He worked with Thriftway and Super Value stores. In 1958 Chuck and his family moved to Knoxville, Iowa and Chuck worked as manager for the Knoxville Super Value and later he was manager for the Knoxville United Food Store. In the early 1970's Chuck became the Knoxville Chamber of Commerce Director and for the next 27 years Chuck helped Knoxville grow. After retiring from the Knoxville Chamber, Chuck managed the Knoxville Industrial Development Corporation.
Chuck had a passion for golfing, card playing, fishing and woodworking. He was a hardworking, talented man that enjoyed cooking and house projects on the home that he and Mary Belle lived in for 56 years.
Those left to cherish Chuck's memory include his two children, Pamela Vinson and her husband Kenneth of Marshalltown, Iowa and Bradley Day and his wife Holly of Lillian, Alabama; six grandchildren, M. Scott Vinson, Brian (Christina) Vinson, Allison (Justin) James, Eric (Bryan) Day, Adam Day, Nathan (Tara) Day; and three great-grandchildren, Grace James, Madelyn James and Noah James. Charles is also survived by his sister Doris Sayles and many nieces and nephews.
Charles is preceded in death by his father and stepmother, Charles and Fern Day; his mother Marie Day; his loving wife of 68 years, Mary Belle Day; and his sister Shirley Shivvers
A memorial has been established in Charles' memory to the Iowa Veterans Home Memorial Fund. Online condolences can be sent to www.winfieldfh.com.
Published on January 3, 2020
To send flowers to the family of Charles William Day, please visit Tribute Store.

Send flowers
in memory of Charles

A place to share condolences and memories.
The guestbook expires on April 02, 2020.

Virginia rayl
Sad to hear of chuck’s passing. Mary Belle has & I we’re best friends in her last years and our husbands played cards together
A wonderful couple!!
View all